Front-line workers in US warn Congress: Lack of PPE is killing us

Eric Colts is a bus driver for the city of Detroit who lost his best friend, fellow bus driver Jason Hargrove, to COVID-19 on March 31 – just 10 days after a rider was coughing on his bus.

“That Jason was in the hospital alone and just the pain of knowing that he had no one around him, is what’s really hurting his family and myself and also his fellow co-workers,” Colts told a United States House of Representatives panel on Thursday, describing the fear he faces going to work every day.

“The reason that I’m really afraid is the simple fact that I go to a stop, not knowing who’s going to be at that actual stop. I don’t know who they’ve been in contact with. I don’t know if they have the virus themselves,” Colts told the House Select Subcommittee on the Coronavirus Crisis.

Hargrove was one of as many as 200 transit workers in the US – according to union estimates – who have been killed by the coronavirus, putting a human face on the risks faced by all essential workers in the US at the moment. At least 65 grocery workers have died, and more than have been 9,000 infected. More than 100 nurses have died.

“My own hospital system had been preparing for the pandemic since the novel coronavirus was first reported,” said Dr Megan Ranney, an emergency physician in Providence, Rhode Island.

“We were running out of essential protective gear, and there was no more to be had,” she said.

The rush of COVID-19 patients overwhelmed the hospital. Basic supplies and medicines ran low. Critically sick patients were crowded into every available ward. Ethical dilemmas about who to save and who to let die took an emotional toll. Under the stress, one of Ranney’s emergency room colleagues committed suicide.

So honored to get to talk to the House today about the perspectives of frontline emergency docs, nurses, techs, & more. About our need for PPE. About our exhaustion & frustration in the face of #COVID19.

Proud to see my colleague and friend, @getusppe co-founder and all around nonstop brilliant frontline emergency medicine doctor/policy expert, and rational thinker
Dr. @MeganRanney speak to @HouseDemocrats and @HouseGOP about #GetUsPPE and more.

Dr. Ranney is the hero we need! 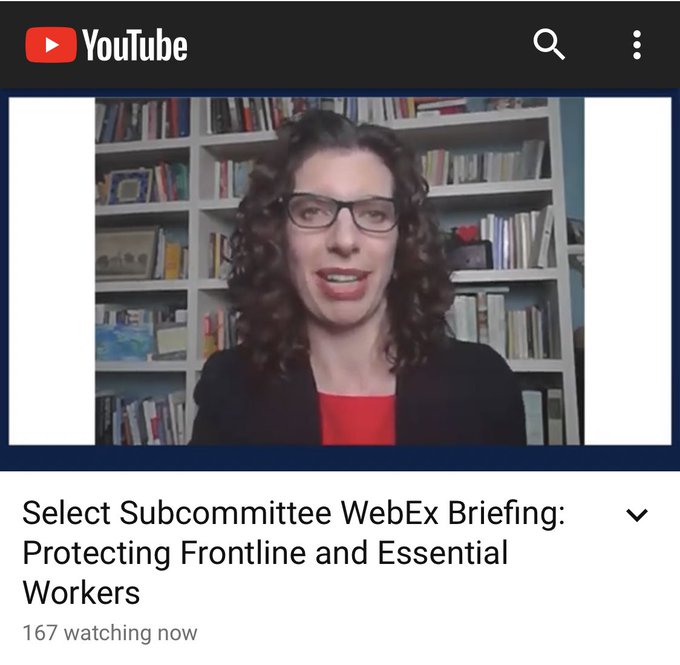 26 people are talking about this

Talisa Hardin, a nurse in Chicago, described the shortage of PPE at her hospital.

“The percentage of patients who eventually test positive is very high, but our hospital management has consistently refused to give nurses in my unit the protections that we need to avoid exposure and infection,” Hardin said.

“Before the pandemic nurses could access PPE from a supply room. When the pandemic hit, management took all of the supplies out of the room,” she said.

Nurses nationwide have been protesting a lack of proper protective equipment and demanding that the US Occupational Safety and Health Administration issue an emergency order requiring hospitals to supply PPE.

“We are now responding to calls for about six to 10 cardiac arrests in an eight-hour tour,” said Diana Wilson, an EMT with the New York City Fire Department.

“Despite our best efforts to save lives, we are finding patients dead in their homes, sometimes even in their cars. This pandemic is dire,” she said.

Marcos Aranda, a janitor, counts himself lucky as a union member. He gets paid sick days off. Many janitors do not, and they are forced to keep going to work without PPE.

Zenobia Shepherd is the mother of a grocery clerk, Leilani Jordan, who died in Maryland. Jordan was disabled with cerebral palsy, but worked at a supermarket helping older people with their groceries.

“Why couldn’t a simple PPE be provided to the grocery store workers?” Jordan’s mother asked.

3 Tips for Investing in Your Husband