Germany’s workers are struggling against a cultural shift in employment contracts as the gig economy booms.

In August, Stefano Lombardo was feeling pretty good about his job: After four years of hauling pizzas and burgers through Berlin, he was one of food-delivery startup Deliveroo’s most experienced riders, and the company had just promised him new gloves and a T-shirt with its teal-hued logo. Three days later, Deliveroo said it would shutter its operations in Germany.

“It came as a total surprise,” said Lombardo, a 41-year-old Italian who had worked for the startup since 2015, cycling across the German capital with a boxy backpack filled with food from any of dozens of restaurants. “It was a hard day for riders.”

Company loyalty has long been key to the social contract in Europe’s biggest economy: lengthy, sometimes lifelong solidarity with an employer is rewarded with robust benefits such as a company car, holiday bonuses, and pension plans. The rise of so-called gig economy jobs with the likes of Deliveroo, Uber, and AirBnB threatens that deal. The number of freelancers in Germany jumped by more than a third in the past decade, to 1.4 million, according to lobbying group BFB.

German startup Helpling connects freelancers with customers who need a hand cleaning the kitchen, walking the dog, or assembling Ikea shelves. Lime has an army of independent contractors it calls “juicers” who pick up electric scooters, charge them at home, then drop them back on the streets in the wee hours for about 5 euros per device. And Fiverr, an Israeli group that connects companies with coders, videographers, and translators, is expanding in Germany.

At Deliveroo’s German operation, fewer than 10% of the 1,200 workers were on staff. The rest were people like Lombardo who got paid 5-6 euros per delivery. The cyclists had to supply their own bikes and mobile phones and were responsible for any repairs. Sick? Call the doctor and don’t expect to be paid until you’re back in the saddle. And riders had no unemployment protection, so when Deliveroo announced its retreat from Germany, they got just a few weeks’ pay from the company. 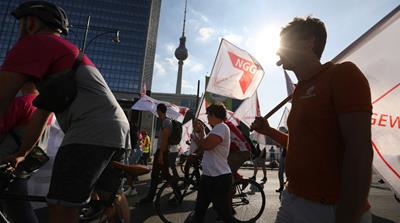 “We need stronger regulation of the platform economy to ensure startups play by the rules,” said Christoph Schink, a leader of the NGG union, which represents delivery riders. “People who are on the streets for them whether it rains or snows aren’t seen as part of these companies.”

The gig economy is redefining the employer-employee relationship just as the German growth engine is starting to sputter. Manufacturing is already in recession, and both exports and imports declined in August, suggesting weakening domestic demand coupled with the industrial slowdown. The far-larger services sector could follow if rising joblessness damages consumer spending.

The number of companies expecting to reduce employees’ hours—a way to trim labor costs without layoffs—has tripled from last year, according to the Ifo research institute. And big players such as auto parts maker Continental, ailing lender Deutsche Bank, and engineering giant Siemens have announced tens of thousands of job cuts since April.

“These cases indicate the economy is entering choppy waters,” said Oliver Stettes, an analyst at the IW Cologne economic research institute. “The growth in jobs is slowly coming to an end.”

That shift is happening even as the number of gig-economy jobs grows, especially in Berlin, where dozens of startups are founded every month. Unions fret that this type of employment will spread to other parts of the German job market, especially if the broader economy slips into recession.

Companies such as Deliveroo and Lime say freelancers can help them handle unexpected shifts in customer demand, and that the flexible working hours mean they can offer jobs to people who might otherwise be unemployed. And the services often make freelance work more transparent and secure. In Asia, for instance, an Uber-type startup called Grab offers insurance to its scooter drivers and encourages them to wear a helmet.

Lombardo says he earned as much as 4,000 euros a month before taxes. But he also got a taste of the precariousness of such jobs. In mid-2017, Deliveroo changed from an hourly wage to a pay-per-delivery model. When Lombardo refused to sign the new contract and instead tried to negotiate, Deliveroo let him go. A few weeks later, after failing to find better options, he relented and signed the new deal.

Compared to traditional jobs, there are plenty of downsides to freelancing. Experienced Uber drivers, popular AirBnB hosts, or efficient Lime juicers can’t take their rating or status with them to the next job. It’s next to impossible to build up a decent social security or pension safety net freelancing. And there’s generally no works council, a labor group mandated by German law that represents employee interests in everything from break rooms to wages. IG Metall, Europe’s largest trade union, has been warning of unfair conditions for gig-economy workers, and in July urged Google’s YouTube to give freelancers who create content for the site a better deal.

Given the growth in the gig economy, governments should set up digital social security accounts for such workers, says Enzo Weber, an economist at the Institute for Employment Research, a publicly funded think tank. Those accounts would be automatically topped up with small sums after each burger delivery or Uber ride, says Weber, who has proposed the idea to the European Commission and the German Labor Ministry.

“The companies get an efficient digital mechanism, customers won’t even notice, and the workers get hassle-free social security,” Weber says. 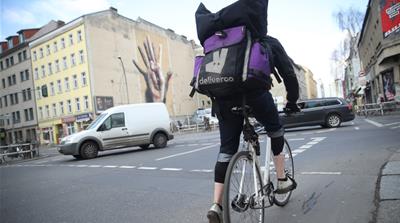 Meanwhile, Lombardo is cycling again. He and a pair of friends started a food delivery collective called Kolyma2 that serves 15 restaurants. The group is seeking to establish an egalitarian ethos—each worker, whether rider or software developer, has the same rights—and it’s experimenting with innovative ideas such as waste-free deliveries in which riders pick up Tupperware containers at customers’ homes and bring them back filled with food.

“We want to do things differently,” Lombardo said. “Working for Deliveroo was fine, but the project lacked economic sustainability. They simply disappeared.”