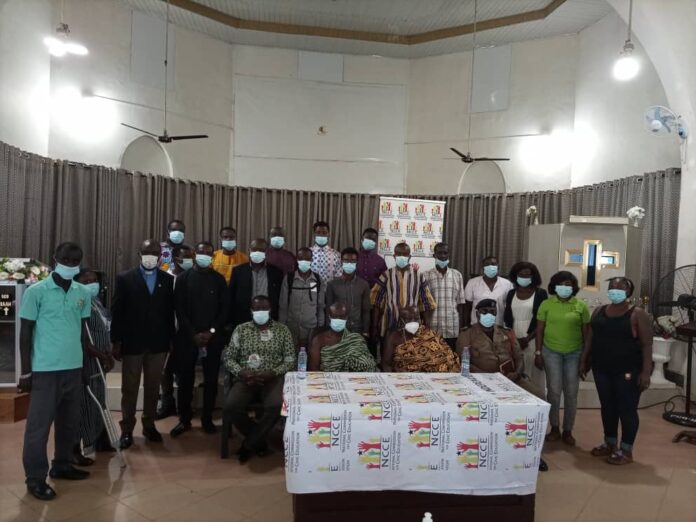 A traditional ruler has called on chiefs and queens not to dabble in partisan politics to dignify the chieftaincy institution and strengthen societal peace and cohesion.

Nana Fosu Darkwaa, the Sompahene of Bechem Traditional Council said chiefs and queens remained unifiers, and should therefore avoid behaviors that could divide the people and slow down development processes in the local communities.

Speaking at an Inter-Party Dialogue Committee (IPDC) meeting held at Bechem in the Tano South Municipality of the Ahafoe Region, Nana Darkwaa advised state institutions to discharge their duties devoid of partisan lines.

The National Commission for Civic Education (NCCE) with support from the European Union (EU) organized the meeting attended by traditional rulers, political party representatives, youth and women groups, civil society organizations and actors as well as religious organizations and professional bodies and heads of departments and agencies.

It was aimed at sensitizing the participants on political violence and extremism and other emerging national issues of concern.

Nana Darkwaa commended the NCCE and its partners for their intensified efforts to promote peace and social cohesion in the country, saying peace remained a pre-requisite for development to thrive and called on the government to adequately resource the NCCE to effectively instill a high sense of civility among the populace.

Mr Eric Adu, the Ahafo Regional Director of the NCCE advised everybody to be alerted, security conscious, and report people with questionable characters and strange movements to the police.

He said the 2020 Global Peace index had ranked Ghana’s most peaceful country in West Africa, third in Africa, and 43rd world, and there was the need for the nation to preserve her prevailing peace and social cohesion for development to progress.

As a democratic country, Mr Adu advised followers of various political parties in the country to tolerate and remained decorous in order not to mar the beauty of the nation’s democracy, and erode its democratic gains.

Assistant Superintendent of Police (ASP) Daniel K. Gadzekpe, the Tano South Municipal Police Commander advised the populace to be vigilant and report people with suspicious characters to the police.

He said crime combat remained a shared and collective responsibility and appealed to the general public to support in that regard.

Earlier in a welcoming address, the Tano South Municipal Director of the NCCE Madam Czarina Akua Enyo Fiawotso, thanked the EU for its continuous support to the commission and expressed the hope other development partners and organizations would help resource the commission adequately to intensify civil education.