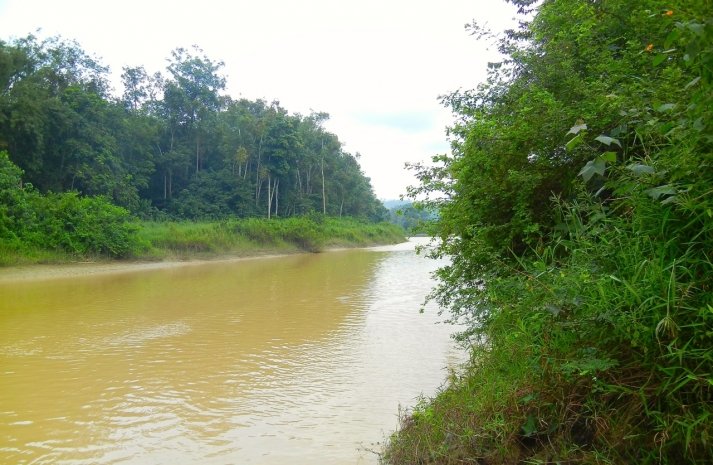 Information gathered has it that, River Benzemata, running through the Juaboso township and a few meters away from the Juaboso District Assembly has gone milky as a result of activities of illegal miners (Galamseyers), upstream the river.

We further gathered that aquatic life in the hitherto fishing river body is endangered, as fished in the river are believed dead as a result of chemicals used by the galamseyers, thus turning the river color into a milky one.

In fact, a visit to the town and the river portrays the picture that speaks volumes for itself.

According to our information, the “Gala stop” declared by the government notwithstanding Chinese galamseyers are said to be still at work, as they use sophisticated equipment like drones in reconnaissance exploration and prospecting for gold in the evenings. A visit to the town in the evenings speaks for itself, as these drones can be seen flying and crisscrossing suspected gold sides along the banks of the endangered river, right in the Juaboso Township, in the vicinity of the District Assembly, magistrate, court, post office and government hospital areas.

It is alleged that the galamsey work is most rife at night. Also, it is alleged that these Chinese galamseyers who have no fixed abode and address are in the town carrying out their activities inside forest reserves as well they are however believed to be fronting for local big wigs in town.

When Mr. Emmanuel Esiape District Coordinating Director (DCD), doubling as acting District Chief Executive (DCE) for the Assembly was contacted, he indicated that matters relating to galamsey are not within the preview of the Assembly. Rather, it is in the hand of the “Galam stop” group, which is national in nature. He said that the group comes and goes, and that there is no proper coordination between them and the Assembly, that they only see the vehicles around.

As such, he comments much on the issue

On the state of the colored river Benzemata, Mr. Esiape expressed regrets. However, he doubted that the color of the river had come about not only as a result galamseyers also by such activities of people throwing refuge into it.

The DCD stated that he was liaising with the local NADMO coordinator to secure some money to desilt the embedded river to give it a swift flow. Also, this desilting program will include gutters in town as well.

When the chief of Juaboso, Nana Ehwi Armah II was contacted he expressed reservation about the color of the river. According to him, he took office barely five (5) months ago, saying that he came to meet this unfortunate situation. All the same, he was doing everything possible, in concert with his elders and people to salvage the situation.

On his part, Nana Kwadwo Gyasi, Abakomahene of the town, who could not comprehend the situation, also expressed worry about it. He recalled that River Benzamata had not only served as a source of drinking and washing for the people, but also as a fishing ground for them. He expressed doubt at the existence of any aquatic life in the river in its present state. Nana Gyasi was however quick to point out that in consultation with the chief and his elders and the Assembly they will find a lasting solution to the problem.

According to some youth in the town, the state of the river now is simply appalling. They stated that prior to this situation, they used to fish in the river, with proceeds from the i.e. sals of their catch used in the payment of their fees. While bemoaming the sad plight of the situation, and the look on an altitude of the authorities, they foresaw that if the situation continued like this, there will come a day when the youth will rise up and the situation could be explosive.

The peeved youth could not understand why few people in the community should enjoy themselves at the expense of the majority and future generation. They held the view that if their predisuccers had done this unthinkable thing, those at top of affairs of the destruction would not have come to meet such a good environment which they are now destroying, because of their selfish needs. The angry youth did not see why they should look on as the environment got destroyed.

Sarcasm – Sarkodie Wa.rns Sarknation To Stop Dissing People Or He Won’t Release The ‘No Pressure Album’