Women’s bobsleigh team made Olympic history as the first Africans to compete. Now, a race is on to popularise the sport.

Lagos, Nigeria – On a warm September morning in Lagos, as more than 30 Nigerian athletes prepared to take part in the country’s maiden bobsled and skeleton tryouts, Seun Adigun was there to encourage them.

“Just be an athlete,” she told them, reassuringly.

Adigun, born in Chicago to Nigerian parents, is the first African to have competed in both the Winter and Summer Olympic Games.

She represented Nigeria on both occasions, in 2012 in London for the women’s 100-metre hurdles and in 2018 in PyeongChang as part of the women’s bobsled team.

“Athleticism [will] come, that can be trained.

Footballers, sprinters and basketball players all came to try out for the frozen-track sports at the National Stadium in Lagos, Nigeria’s commercial centre.

The aim of the talent-scouting event, which was called The Fastest Pusher, was to recruit more athletes for the 2022 Winter Olympic Games in Beijing and in turn, popularise the sports in Nigeria. 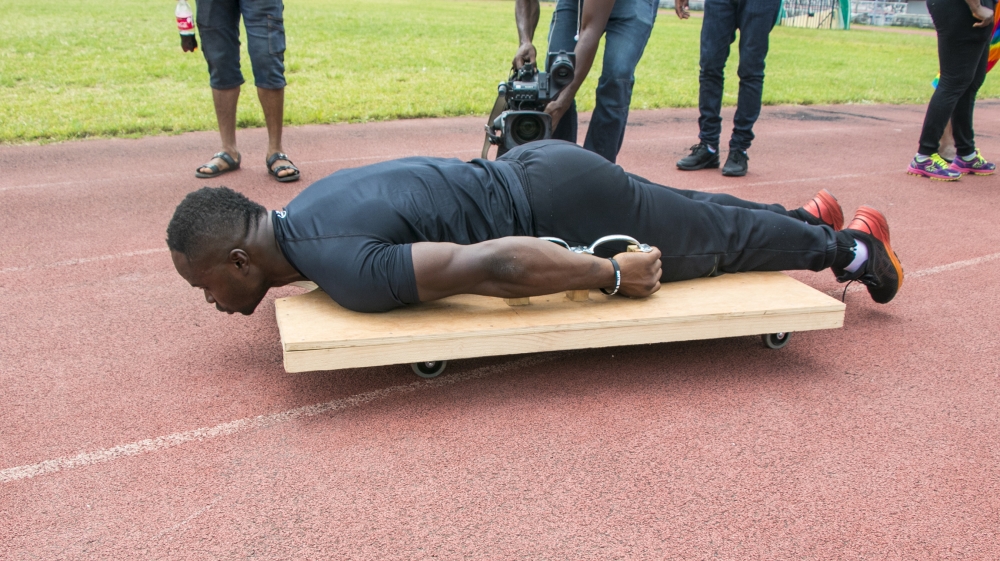 In a few months, the most successful athletes could be training in rather unfamiliar climates.

Participant Nafeesat Aliu, a runner and hurdler, admitted to having no experience in either bobsled or skeleton but said she was inspired by Adigun’s pep talk.

She emerged as the “fastest pusher”, leaving the stadium with gifts from the sponsors and a chance at a bobsled career.

“I have this mindset that if I train, possibly within months I will get better and then be at the medal table,” she said.

“[Adigun] summoned the courage to start participating in bobsled and it’s a big win for her, every girl would want to be like her.”

Adigun’s story has inspired many in Nigeria.

Despite having suffered from tachycardia and other medical conditions as a teenager, she excelled in track and field and later was a central founding member of the three-member Nigerian women bobsled team – in 2016, the same year the team came into being, she started a successful crowdfunding campaign to source the $75,000 needed for an Olympic bid.

Before the 2018 games, Adigun was in Texas and studying to be a chiropractor and completing a master’s degree in fitness and human performance. 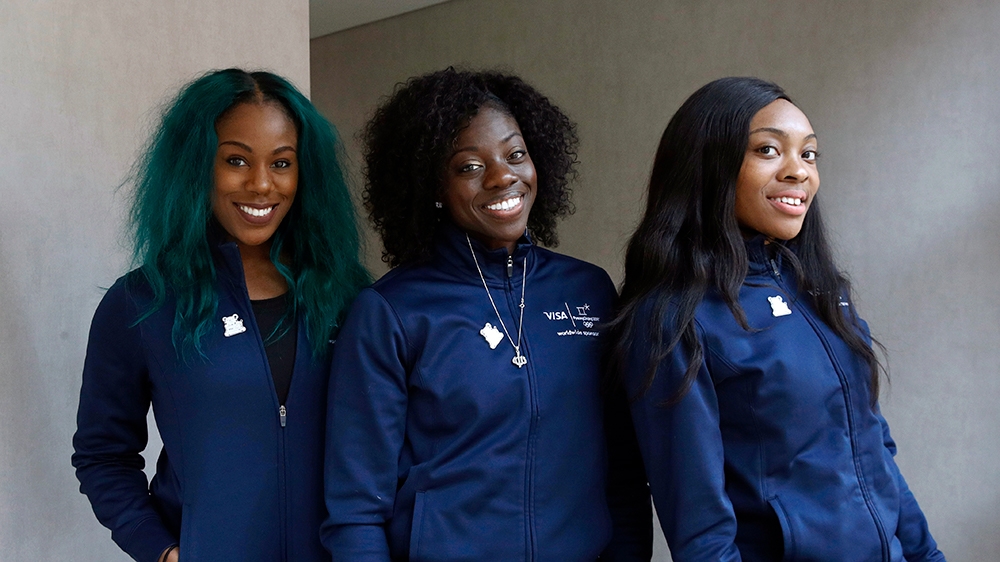 Her teammates Ngozi Onwumere and Akuoma Omega were also busy with education and work respectively.

Between them, they were short of time and had no access to standard facilities and equipment.

But with dedication and assistance from donors, they arrived full of hope at the games inSouth Korea in February last year.

Alongside skeleton athlete Simidele Adeagbo, they hoisted Nigeria’s flag for the first time in 84 years after the maiden games were held.

“Honestly, we respect the sports in their various respective lanes but we are not competing with football, we are competing alongside them,” she said.

“We are just trying to highlight the other types of talents that are in the country because not everybody is the best football player. The football players that we have now are amazing at what they do, but also they are not bobsledders or skeleton athletes. We are trying to create more opportunities for Nigerians.” 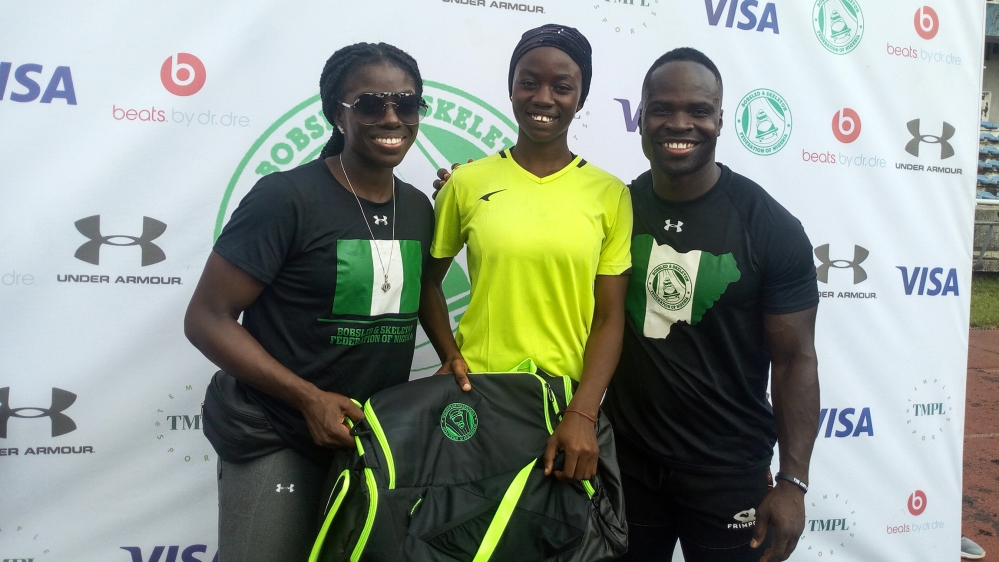 Nafeesat Aliu, centre, performed well in the September tryouts session in Lagos. In this image, Seun Adigun is to her right and Akwasi Frimpong is on her left [Tolu Olasoji /Al Jazeera]

Emeka Enyadike, a broadcaster and the director of Digital Sports Africa, believes bobsled and skeleton could become popular.

“Through social media, we can get it done, and I think [the Nigerian women bobsled team] achieved a bit of it already with what they did in the last Winter Olympics,” Enyadike told Al Jazeera. “The good thing is that with some of these sports, even if we don’t have the facilities for winter, you can train off track and look for sponsorship.

“It can be big in Nigeria.”

On October 1 last year, a new male bobsled team was announced, comprising three Nigerians and based in Austria.

The sport is considered more seriously in the diaspora than in the country.

After the recent tryouts, Chisom Mbonu-Ezeoke, the Bobsled & Skeleton Federation of Nigeria spokesperson, told Al Jazeera: “Hopefully once they join the team, then people begin to see that this is not a sport for Nigerians in the diaspora or Nigerians with dual citizenship or American-Nigerians.

“It’s a sport for all Nigerians and we hope that that would get fans aboard ahead of 2022.” 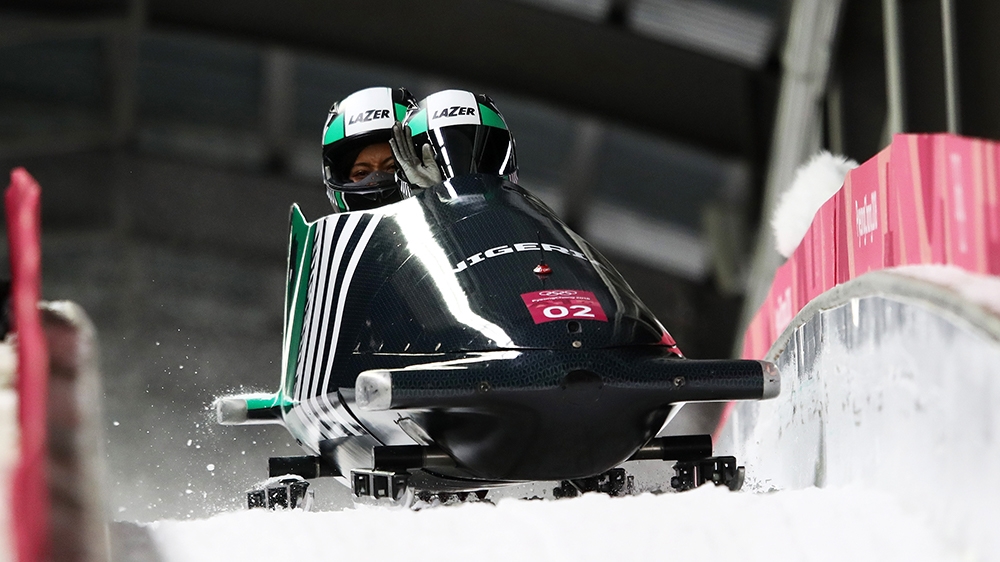 Nigeria, a sub-Saharan country that does not have winters, plans to recruit athletes who may have never experienced snow – according to Adigun, this is a challenge.

“We’re dealing with a sub-Saharan temperature and we are going to deal with subzero temperatures, so it’s going to be difficult to retain people when they hit the cold,” she said.

The plan is to have them learn the technique first.

Adigun, who lives in the United States, and Netherlands-based Akwasi Frimpong, a Ghanaian pacesetter in skeleton who came to help out in Nigeria, are unable to keep visiting Nigeria to train new athletes, so a coaching clinic was organised before the tryouts, with trained coaches mostly from track and field events.

“We’d also set up seminars and educate [the coaches] on the ground here in Nigeria,” Adigun said. 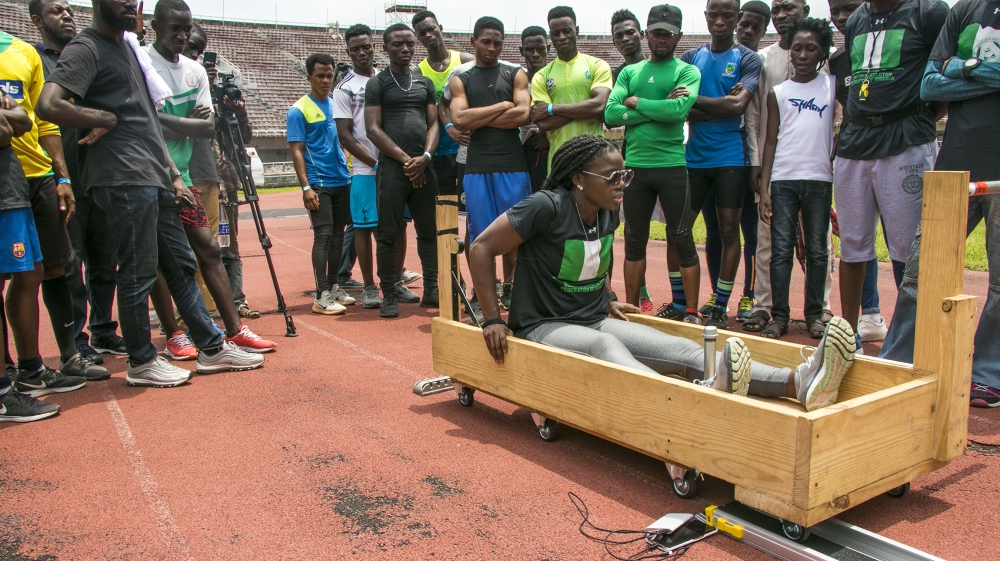 Seun Adigun, founding member of Nigeria’s women’s bobsled team, demonstrates how to use a sleigh at a recent tryout session in Lagos [Tolu Olasoji/Al Jazeera]

Bobsled and skeleton are expensive sports.

A hi-tech sleigh costs about $55,000 and getting team members to train on the ice would be a costly mission.

“The recent development means more funds would be needed.”

While the team made history at the Winter Olympic Games last year as the first Africans to compete in the bobsleigh event, they did not win any medals despite hurtling down ice tunnels at more than 97 kilometres per hour (60 miles per hour). Overall, they were last in the women’s bobsleigh. Jamaica was just behind them, while Germany won.

But it is just the beginning.

“The hope is not only to continue to increase the awareness of the sport in the country but also in the continent and also let people know,” said Adigun, “that we can do this sport, even in Nigeria.” 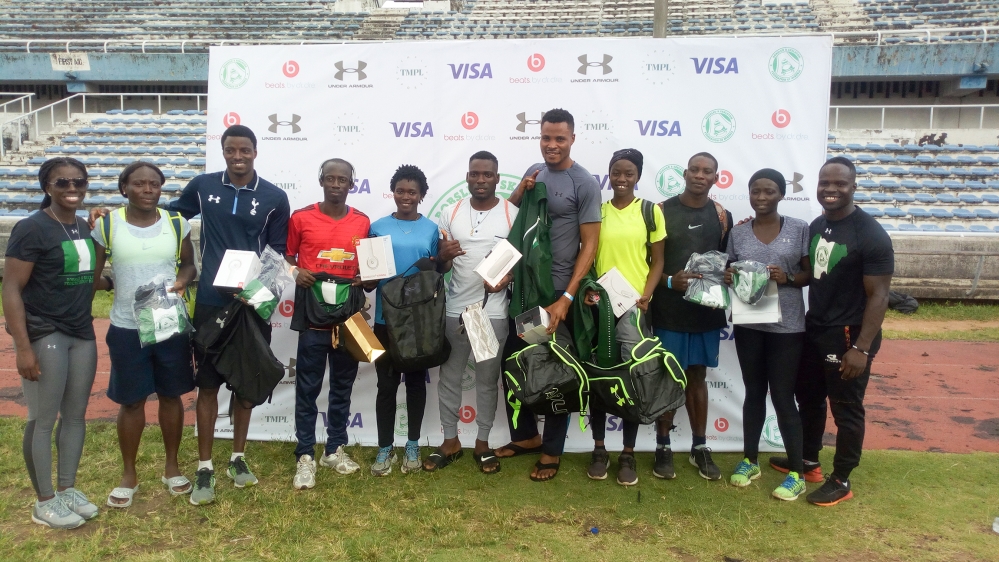 Nigeria’s next generation of bobsled and skeleton athletes? A cross section of winners after the tryout session, flanked by Seun Adigun and Akwasi Frimpong [Tolu Olasoji /Al Jazeera]

Gayle King Tells It all About Her Infamous R. Kelly Interview — The Raw And Genuine Moments Left Fans Confused

At a time white men were suspected as imperialist agents, this British colonial servant Jimmy Moxon became a tribal chief in Ghana