Thousands of Sudanese have taken to the streets to mark the first anniversary of the uprising that eventually led to the removal of longtime President Omar al-Bashir and to demand justice for slain protesters.

In Sudan’s capital, Khartoum, people rallying on Thursday chanted slogans such as “we’re revolutionaries, we’ll finish our mission” while motorists hung Sudanese flags from their cars. Others carried pictures of friends and loved ones among the scores of demonstrators killed during the uprising.

In the town of Atbara, where the anti-Bashir protests began on December 19, 2018 before spreading nationwide, hundreds of people were expected to arrive by train from Khartoum to stay for a week of festivities.

The journey is organised by Sudan’s traditional authorities and the protest movement as a tribute to the thousands of demonstrators who travelled in the opposite direction to the capital at key moments during the uprising.

In Khartoum, the military blocked roads leading to its headquarters, where the protesters had staged a months-long sit-in outside that became the hub in their struggle for democracy – even after the overthrow of al-Bashir on April 11.

In August, after protracted talks with the generals who removed al-Bashir, protesters won a deal to set up a transitional government and pave the way for civilian rule. The agreement provided for a joint civilian-military ruling body during a transition period of a little over three years before elections can be held, while veteran economist Abdalla Hamdok was appointed transitional prime minister.

Al Jazeera’s Hiba Morgan, reporting from Khartoum, said that despite the blocked roads, hundreds of people continued to march towards the military’s headquarters, where more than 100 protesters were killed on June 3 when security forces raided the sit-in.

“They’re saying that they want to make sure that the army hears that they still have the voice to demand justice, that despite a transitional government in place, despite some members of the military sharing seats in the sovereign council, they’re still not satisfied,” Morgan said.

“They’re saying that this revolution came at a loss of life. The achievement that they made so far came with many people losing their life and they owe it to those people to try to make sure that change is brought.”

According to doctors linked to the protest movement, more than 250 people were killed in violence related to the demonstrations against al-Bashir and the military rulers who initially replaced him.

Amnesty International on Thursday called on Sudan’s transitional authorities to honour their commitments to restore the rule of law and protect human rights.

“The new Sudan authorities must ensure that members of the security forces who committed horrific crimes or used excessive force against protesters are held accountable in fair trials without recourse to the death penalty,” said the rights group’s Seif Magango.

Bashir, in prison since his overthrow, was sentenced on Saturday to two years’ detention for corruption in a correctional centre for the elderly – the first of several cases against him.

The charges stemmed from millions of dollars he had received from Saudi Arabia.

In May, Sudan’s attorney general said al-Bashir had been charged with the deaths of those killed during the uprising, without specifying when he would face trial.

The 75-year-old is also wanted by the International Criminal Court on charges of genocide, war crimes and crimes against humanity.

The accusations relate to his role in the Darfur war that broke out in 2003, when ethnic minority rebels took up arms against his Arab-dominated government, which they accused of marginalising the region. 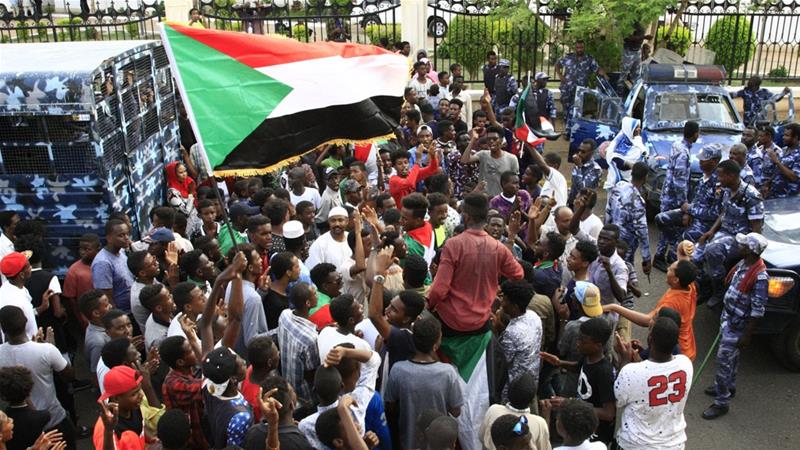 Will Sudan return to civilian rule?