The Democratic-controlled US House of Representatives is scheduled on Thursday to hold its first vote in the impeachment investigation of President Donald Trump.

The measure calls for public hearings and the release of transcripts from closed-door proceedings. It also outlines what rights Republican politicians and Trump himself would have to participate as the process moves ahead.

The impeachment inquiry focuses on a July 25 telephone call in which Trump asked Ukrainian President Volodymyr Zelenskyy to investigate Democratic political rival Joe Biden, a former US vice president, and his son Hunter, who had served as a director for Ukrainian energy company Burisma. Trump has denied wrongdoing and called the inquiry a sham. There has been no evidence of wrongdoing by the Bidens.

The investigation examines whether Trump misused the power of his office for personal political gain and, if so, whether that rises to the level of “high crimes and misdemeanors” that merit impeachment and removal from office under the Constitution.

Here are all the latest updates as of Thursday, October 31:

US President Donald Trump has condemned a House of Representatives vote that formalised the impeachment investigation on Thursday.

Trump took to Twitter just moments after the resolution, which sets the parameters for the inquiry and public hearings going forward, passed by a 232-196 vote mostly along party lines.

48.3K people are talking about this

Meanwhile, White House Press secretary Stephanie Grisham  said in a statement that the vote enshrined “unacceptable violations of due process into House rules.”

She further described the probe as “unfair, unconstitutional, and fundamentally un-American”.

Her statement was echoed by Trump’s reelection campaign which accused Democrats of trying to legitimise the investigation, which they have already been conducting for more than two weeks, after the fact.

The US Constitution does not require a vote for the House to launch an impeachment investigation.

“Voters will punish Democrats who support this farce and President Trump will be easily re-elected,” Campaign manager Brad Parscale said.

The Democratic-controlled House of Representatives voted to approve a resolution on Thursday that sets rules for public hearings in the impeachment inquiry of US President Donald Trump . 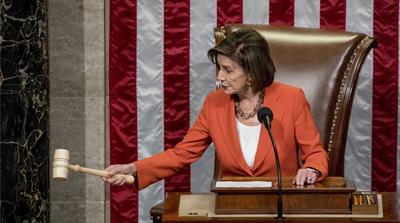 The resolution, approved by a 232-196 vote, authorises House committees to move forward with formal, public hearings.

The move has largely been seen as an attempt to nullify Trump administration and Republican claims that the inquiry is not official without a vote.

Legislators voted mostly along party lines, with all Republicans voting against the resolution and two Democrats breaking from colleagues and voting no as well. One Independent voted in favor.

In a tweet on Thursday, President Trump stood by his claims that the July 25 phone call with the Ukrainian president, which is at the heart of the House impeachment inquiry, contained no wrongdoing.

“Read the transcript!” Trump tweeted as the House prepared to vote on a resolution that would formalise the impeachment inquiry as well as lay out the parameters for the inquiry going forward.

Trump was referring to a memo of the phone call, which the White House released after a whistle-blower’s complaint about the call. The White House, quoting Trump’s tweet, later tweeted a copy of the memo, which is a recreation from notes, and not a direct transcript of the call.

43.9K people are talking about this

On Tuesday, an army officer and top Ukraine expert at the National Security Council told a closed-door House panel that the memo left out crucial words and phrases, the New York Times reported.

Elected officials in the House of Representatives gave arguments on the House floor before Thursday’s vote to approve ground rules for their impeachment inquiry of Trump.

Standing next to a large US flag on the floor of the House, House Speaker Nancy Pelosi said the impeachment inquiry was necessary to defend the Constitution and prevent an abuse of power by Trump.

“The times have found each and every one of us in this room,” Pelosi said. She urged legislators to vote in favour of the impeachment rules “to protect the Constitution of the United States. What is at stake in all of this is nothing less than our democracy.”

Today is about more than the fairness of the impeachment process. It is about the integrity of our electoral process.

Democrats are trying to impeach the President because they are scared they can’t defeat him at the ballot box.

5,782 people are talking about this

Republicans largely portrayed the inquiry as a partisan attempt to undo the results of the 2016 presidential election, with House minority leader Kevin McCarthy, the top Republican in Congress, saying Democrats have tried to unjustly portray Trump’s “legitimate actions” with Ukraine as an impeachable offence.

“For 37 days and counting they [democrats] have run and unprecedented undemocratic and unfair investigation, this resolution today only makes it worse,” he said.

Tim Morrison arrived on Capitol Hill on Thursday to appear before House impeachment investigators. Morrison plans to leave his job at the White House, a senior administration official who was not authorised to discuss Morrison’s job told the Associated Press News Agency.

Morrison is expected to corroborate the testimony of Ambassador William Taylor, who said last week that Morrison had notified him of a push by the president and his allies to withhold military aid and a White House meeting from Ukraine in exchange for an investigation into the gas company linked to Hunter Biden, the Washington Post reported. 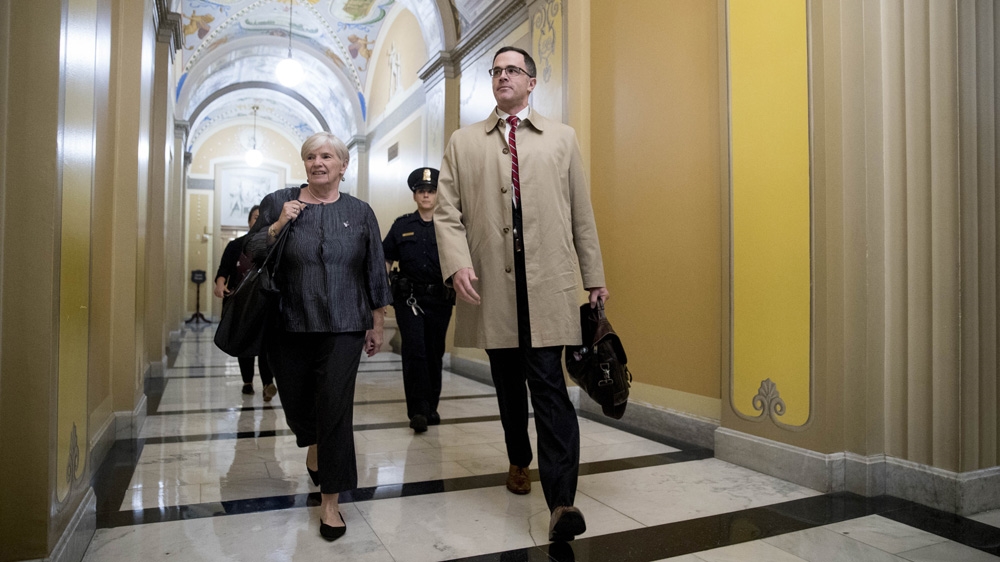 Former National Security Adviser John Bolton will not agree to a voluntary interview in the impeachment inquiry against President Donald Trump, his lawyer said on Wednesday, shortly after the former official was summoned by Democrats.

The House committees leading the impeachment investigation had asked Bolton to appear behind closed doors next week. But Bolton’s lawyer, Charles Cooper, says Bolton will not appear without a subpoena.
Democrats have issued subpoenas to several other witnesses who ended up testifying.

Politicians want to hear from Bolton after other witnesses told them of his concerns with Trump’s dealings in Ukraine and the backchannel activities of Rudy Giuliani, Trump’s personal lawyer.

Further evidence of private interests seeking the removal of former US Ambassador to Ukraine Marie Yovanovitch emerged on Wednesday in testimony to the Democratic-led impeachment inquiry.

It was unclear why, she said in her opening statement to legislators, posted online by the Washington Post.